Justin Fields is on the injury report for NFL Week 12. Will the Bears risk their young QB if he is at less than 100%? 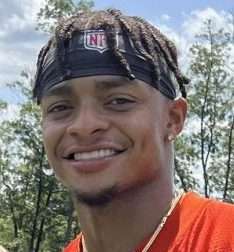 The Chicago Bears are 3-8 this season and they have not won since beating the New England Patriots on Monday night football several weeks ago. The Bears had a great injury report for that week, however, the same can’t be said for Week 12. Chicago’s quarterback, Justin Fields, is among the players that the Bears are monitoring for injuries this week.

Fields was a limited participant in practice

Fields has been limited in practice all week due to a shoulder injury. His designation for the upcoming game is “questionable.” One factor that could make him feel more to the “doubtful” side is that the Bears are not facing any sense of urgency at this point in their season. It’s clear that this is a team that is playing for the future, not the 2022/23 season.

When the Bears defeated the Patriots, they might have had some momentum. However, whatever they had they gave up when they became trade deadline sellers. They’ve gone from 3-4 to 3-8 since that time. Even if they run the tables, there’s a chance that they don’t make the playoffs. The Bears would be dumb to risk their quarterback’s health if he’s not free and clear of injury concerns for Week 12.

The Jets have QB issues too

The Jets have Zach Wilson in good health. However, they recently announced that they will not be going to him. Mike White will get the start for New York. Wilson was never doing an ace job this season. However, last week’s 3-point performance seemed to be the final straw for the No. 2 pick from the 2021 NFL Draft, at least for the time being.

The Jets do have something to play for. They are 6-4 and a victory on Sunday would help solidify their playoff status. With Mike White expected to start and Justin Fields questionable, this Week 12 game might be White vs Trevor Siemian, the latter being Chicago’s QB2.